A monochord consists of a single string stretched over a sound box, with the strings held taut by pegs or weights on either end. It was used earlier by others, but most of our current knowledge of the instrument is of its use by Pythagoras as early around the 6th century BC for scientific research on the nature of sound. The instrument is most important in Western music for its scientific research, rather then its musical qualities.  Other cultures, however, such as in many parts of Africa, Brazil, and Hawaii (just to name a few) have used it as a musical instrument.  Jeff Cottrell cites on the importance of the instrument in early cosmology, numerology, and music theory. “Pythagoras' study of ratios on the monochord led philosophers to believe that these ratios also governed the movement of planets and other cosmic matters (Ptolemy).  This provided the bridge between the world of physical experience and numerical relationships, giving birth to mathematical physics. In addition, this elevated music to one of the highest intellectual pursuits. Furthermore, since the "perfection of sounds" could now be revealed by numbers, all simple numeric ratios could be visualized as sounds. Kepler's "harmony of the spheres" is based on this, as well as harmonically resounding architecture. If the visible proportions of a building can be expressed in numeric ratios, then their relationships can be "heard" as chords. Like the "golden section" of architecture, musical harmony "imposes order in the hearts and minds of men by virtue of their simple, natural relationships" (Harnoncourt). This also helped support the baroque idea that music was a reflection of the divine order (unless you were a minstrel, perhaps).” 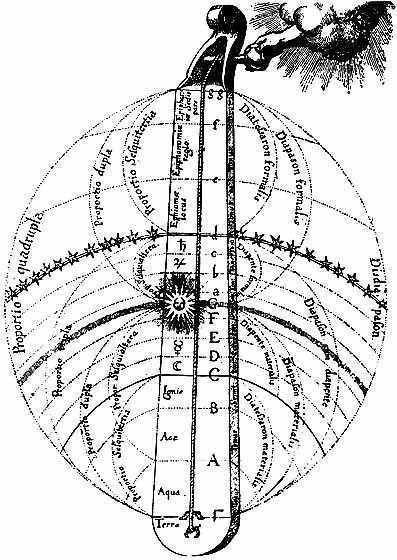 To introduce the harmonic series let’s look at a quote from Reginald Bain who provides a very succinct definition and description:

When musicians use the term overtone series, they are generally referring to a set of frequency components that appear above a musical tone. The related term harmonic series is a more precisely defined concept with applications in both music and mathematics. Though musicians sometimes use these terms interchangeably, the term harmonic series specifically refers to a series of numbers related by whole-number ratios. For example, the series of frequencies 1000, 2000, 3000, 4000, 5000, 6000, etc., given in Hertz (Hz.), is a harmonic series; so is the series 500, 1000, 1500, 2000, 2500, 3000, etc. Notice that the difference in frequency between adjacent members of both series is constant, that is to say, the harmonics are equally- spaced. The lowest frequency component of such a series is called the fundamental. For example, the fundamental of the first series is 1000 Hz, and the fundamental of the second series is 500 Hz. The other (higher) frequency components are called overtones, harmonics or partials.

Harmonic of an Open String

Let’s take a look at a chart of the first sixteen harmonics from the harmonic series. The Monochord used for demonstration has two bridges 100cm apart and has its’ 1st harmonic and fundamental to C at vibrating at 130.8 hz.  While striking or plucking the string to generate sound the fundamental pitch sounds as well as all the “harmonics”.  These harmonics can’t always be heard distinctly but are all sounding together as the string vibrates.

We can isolate out these harmonics on a single string on the monochord by dividing the string in whole number divisions.  The point where the division occurs is called a nodal point.  If we take the finger from one hand and place it lightly at one of the nodal points and use our other hand to pluck the string we can hear the isolated harmonic.

The First 16 Steps of the Harmonic Series

Let’s look into this a little more.  When we double the initial pitch, to the 2nd octave the frequency of the pitch doubles, if we then double that, to the 4th harmonic it doubles again, again at the 8th etc.  So, in the above chart we have octaves at the 2nd, 4th, 8th, and 16th harmonics.  Note how there are more “pitches” or nodes between each successive octave.  If we look at the hertz values generated by the  pitches in relationship to each other we will see that if we compare two nodal points to each other they will have the relationship of the nodal point.  So, for example, the 2nd harmonic to the 1st harmonic is beating twice as fast.  If we look at the third harmonic (392.4) we see that that is 3 times the 1st harmonic (130.8*3= 392.4) and also 3/2 (1.5 times) faster than the 2nd harmonic (261.6*1.5= 392.4).

With our new knowledge of how harmonics relate to each other we can examine how nodal points relate to musical intervals.  On the next page is a chart that shows another view of the harmonic series generated by our demonstration monochord.   In addition to the Harmonic and Frequency from the last table we have three new columns.  Column 2 shows the note generated by the harmonic.  In column 3 we have the interval from the harmonic you are looking at and its’ relationship to the harmonic that is its’ nearest octave of the fundamental.  So for the 3rd harmonic it has an interval of 3/2 since the 2nd harmonic is closer to it than the first harmonic.  We also want to reduce the intervals down to their lowest numbers, so if we take the octave of the 3rd harmonic, the 6th harmonic, this would be 6/4 (the sixth harmonic/the closest octave of the fundamental) but since 6/4 reduces down to 3/2 that is the ratio I’ve given.  The 4th column shows the musical interval of the ratio from the 3rd column.

Another way to look at the music intervals generated by the overtone series is to look at the relationship between two harmonics that are directly next to each other.  The next chart takes the table we just looks at and shows the ratios of the two subsequent harmonics in column three and the interval they create in column 4.  We’ll only go to the 10th harmonic since at this point we are just getting too smaller and smaller “2nds”.

The fundamental frequency of a stretched string is inversely proportional to the length of the string, keeping the tension and the mass per unit length of the string constant (this is known as pythagoras law of string proportion and also Mersenne’s laws).  Using the 1st and 2nd harmonics as examples, a string length that was exactly half of another string (with the same thickness, amount of tension etc.) would be beating twice as fast as the string twice as long. The third harmonic which has a ratio relationship to the 2nd harmonic of 3/2 would be 2/3 the length of the open string and would be beating 1.5 times as fast (3/2).

Let’s revisit our Major Scale that we looked at from basic Western Music Theory and show what the music ratios for this scale in a tuning system based on the harmonic series.  Note columns 4 & 5.  Column 4 shows the exact computations I used to find the position to put the bridge and column 5 shows the position isolated.  Let’s use the ratio of 5/4 as an example, first the math and then the explanation.

I flipped the ratio to get it’s inverse, 4/5 and then did the division which gives me 4 divided by 5 which equals .8.  I then times that by 100 (the distance between the 2 bridges and length of our open string) to get 80, this is how long the string needs to be.  I then subtracted 80 from 100 to find the placement to put the bridge, 20.  If I place the bridge at 20cm and then pluck to the right of it the pitch for 5/4 is sounded.

All Supplemental Material For This Course